Interview with Jason Mabie from the UC Men's Octet 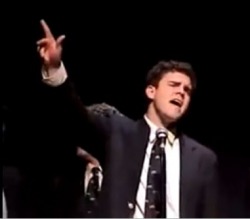 This interview took place in May 2009 after Jason commented on the comments I made on YouTube. Sometimes it’s good to be a vocal thinks-she-knows-it-all.  I remember it was a Sunday-but not much more. You should probably know that I have an aversion to talking to people on the phone. Well, it’s somewhere between an aversion and a phobia.  And yes, it applies to people I want to talk to. Just ask my Gramma how often I call her. And she gives me birthday/Christmas/ good girl money. So, part of me was procrastinating on the interview, while another part of me really wanted to interview him. Ask my friends how much I wanted to do it. For one thing, instead of calling him “Nirvana Guy” my roomies started calling him “Jaaaaayson” And the squees of “Jaaaaayson” rang in the house for weeks. Hahaha.

So, for 2 weeks I had to psych myself up to do it. I used this time to get the Octet fan page ideas together and think up questions for Jason (thus, rewarding myself and defeating the curse of the procrastinator) while Jason finished up his midterms and I was doing a service project in Tacoma. I also had to talk myself down a little, because I didn’t want to sound like a ‘fan girl-idiot” I think I talked myself down a little too much, because I sounded a little too ‘not fan girl-idiot'. I think I was most anxious that I would say: "I love you. Bye." at the end of the interview. Not very professional, but it would be 'typical fan-girl."  I managed to keep from accidentally saying it in the actual interview.  I did rehearse the interview on the voice recorder on my phone to see how it would sound if I used speaker, or just tried to talk regularly into it until I finally found the earpiece, so that I could type out the answers during the interview.

I wanted to make sure I had a pretty good mix of questions for Jason. Some about the Octet in general, some about the 2003 group (which is the fan favorite) and some about Jason himself, because, as a fan I was interested in all these areas. I only wish I transcribed the interview more verbatim. I took notes as I talked to Jason, to get a general idea, then after the interview, I congratulated myself on not chickening out or postponing the interview, because sometimes I do stupid things when I’m  being a wuss. Then, I sat down and tried to remember everything that was said. The notes helped, but they’re not perfect.

I thought it was funny that there were times during the interview that I was so nervous it was hard to type (my hands were actually shaking in the beginning), and then at some point I was so interested in the conversation that I forgot to type (twitterpated/awe). By the time I was actually relaxed, I realized that I had no more questions. Anyway, it was cool of Jason to take nearly a half hour and talk to the Octet’s biggest fan! He’s a great guy and very nice.

These are the questions, and I think I asked them in this order. I made sure that his actual quotes were in quotation marks. All other conversation-not so much.

What is the process for auditioning for the Octet?

Jason:  “Usually it’s a ten hour process. In the morning we run scales see what kind of pitches the guys can do. Then they do parts of songs.” I believe he said that they teach the new guys the backs (backup), to see how the voices will blend with the current Octet – (but I may have imagined that part – because I’m only remembering this as I am finishing this up to post in September.)  and there are 4 or 5 rounds of auditions. He also said that when he auditioned for the Octet, they were looking for 4 people.

Do you audition all the parts every time? (Hey, improvised question. Yay me!)

Jason: Depending on what they need. This year, they had to audition all the parts. Next year they will only need to audition one part.

Is there something that the Octet looks for in a prospective Octet dude? (I don’t think I called them “Octet dudes” in the interview.)

Jason: Stage presence. Charisma. They usually have a theatre background or are heavily involved in high school drama.

How is the music manager selected and what does he do?

Jason: “There is usually one person who is more musically theory inclined (Not sure that I took down the phrase correctly.) who can teach from music & run rehearsals.”  (Jason told me he doesn’t read music, but later I gathered that he has an excellent ear for music- which is why he does that thing he does.)

Is everyone involved in picking the songs for the show or is that what the music manager does?

Jason said that there are a “certain number of standards we do each year”. 30-40 songs.

On average, how long is a person in the Octet?

Jason: “About 2 years.” Jason was in for about 2 ½ year. The Octet have 3 three hour rehearsals per week and 1 hour rehearsal before Sproul per week which is a big commitment for any college student.

Do you prefer Sproul or concert?

What is your opinion of the current Octet?

Jason:  “They’re doing a fantastic job from where they started. This is a rebuilding year for the Octet.” Jason said they started out with one returning member. (Meaning the returning guy had to teach 7 new people the 30-40 Octet Standards. That comment made me appreciate the new Octet a whole lot more.)

Why, do you think that a group like the Octet is so popular at Berkeley?

Jason: “I don’t know. I mean, there’s just something about good harmony. It’s human nature. People are drawn to it. Singing on the Sproul, people walking by stop to watch. Cal has been immensely successful in the ICCA.” (which is the International Championship of Collegiate A Cappella)

Beyond entertainment, what is the role of the Octet at Berkeley? (Mascots or ambassadors were phrases I used, because my vocabulary - she's not too good.)

Jason:  “We represented the university at one night events, Cal songs, football games.  We’re a spirit group. We represented Berkeley when we went to Italy and China.”

You guys spent a lot of time together, how well did you get along?

Jason: “Yeah. We got along. Some of the closest friends I’ve had are from the Octet.” He also mentioned he talks with Kenny sometime. It’s more difficult now that they are spread out.


Which of the songs did you enjoy performing the most?

Jason:  “Rock-y solo’s. Anything with a rocker edge to it. Johnny B Good, Sandy (from Grease), Loves Me Like a Rock” (for example).

Did any other Octet try to attempt Nirvana Medley?

Jason: “No. Some songs are passed on. (Nirvana Medley was written specifically for their group)  Not pretty Enough; no one can do it like Rick (me: being Captain Obvious – the song is about Rick). Right.”

I asked who arranged Bohemian Rhapsody: “Not sure who arranged it.” It was before his groups’ time. It was arranged for 7 parts already, and was 11 pages long. ”It’s a monster, and took a week to rehearse. “

(Interviewer’s note: Recently, while I was on YouTube, I noticed that Kenny posted that the song was arranged in the 80’s. Ooops.)

Was it very stressful to add the commitment of being in the Octet to a full class schedule?

Jason: “Yeah, it’s gonna have an impact.  11 hours a week.  We should be getting units for it. The first year I got the best grades, second year the grades started to slip.”

What was the payoff for all of the hours rehearsing, traveling, and performing?

Jason: “We like to sing. We like to perform. You get a bunch of people who do it well together, it’s unique.”

How did you guys decide who would wear the butt in “I Like Big Butts”?

Jason said he didn’t remember. (Personally, I think they had something on Jordan. I could be wrong, though.)

In Fall ’03, there was a new audition, and still only seven guys. What happened?

Jason: It took a few moments for Jason to remember: “We did have an eighth member, he dropped out (of the Octet) after the first week.”  He was a law student.

Is there a contingency plan in place in case someone leaves for whatever reason?

Jason: “Sometimes you go on, sometimes audition for a new part, depending on the stage of the year.”

For the Spring/Fall 03 concerts, did you or the guys know you were being filmed?

Jason said that his dad filmed the concert (which I knew in the back of my mind, but some sort of weird Octet fueled amnesia presented itself while talking to Jason) "He still flips him out about 1,000,000 views." (Me: Thank your father for me. J)

What was your musical background before joining the Octet?

Jason was “Singing since I can remember…like since I could talk”. He is a vocal impressionist. He can mimic people’s voice. He mimicked Michael Jackson until (Jason’s) voice changed. He was in the movie Home Alone in the choir scene at the end. He got to work with John Williams (I’m a music slouch, and even I know who that is!)  He was also in Major Payne with Damon Wayans. He did High School, Sophomore/ Jr. Year Musicals. “The school I went to for high school had a really good music program.” He got to sing the National Anthem at Graduation.  “My dad sings and plays piano and guitar. Mom sings in church choir. “

Is a musical family background common in Octet? (Another Improvised Question.)


Jason: “Kenny’s mom did theater stuff. I would assume that most people in the Octet had some musical family background.”

Do you perform now?

Jason: “I have a few times. Sometimes on a sunny day go outside with my guitar and just start wailing. It’s good for the soul.’

What type of music do you listen to?

Jason: "I like oldies. 60’s and 70’s music: Motown, Stevie Wonder, Ray Charles. I grew up listening to oldie stations. I knew all the songs, (the Octet) did. Blue Moon, and other oldies." (Crosby, Stills and Nash, & Fleetwood Mac.) He also mentioned that knowing older songs was helpful in the Octet, because many Octet dudes didn’t know these songs.  Jason already knew them.

What are you studying?

I asked him what he was going to do with a degree in Poly Sci (Will I vote for you?) and he wasn’t sure.

Then, I looked down at my computer screen and realized that I had run out of questions…and told him that. I’m not really very socially astute.  I did thank him in a personal message, for his time and for answering my fannish questions. Later, I asked him a question I had been given by a friend of mine but forgot to ask during the interview: Kenny K - Single or Taken? Answer. Taken. And, yes, she’s nice. J Anyway, that’s all for this week.